To help with keeping documentation up-to-date, from now on information on future events such as Plural Awareness Week & Plural Pride Day will be at the Plural Events website.

This page will simply document past events as part of the history project.

The proposed date for Plural Pride Day originally was going to be September 8th, in an attempt to have a date that didn’t fall on major holidays and would not likely fall on a Jewish calendar holiday. Because having a set calendar date would inevitably be on some plural’s trauma dates, it was moved to a floating date as part of an Awareness Week in July. This was following a community survey and an attempt to find a week that did not have any major holidays.

Plurality is the art of being "many." Some may say they're not alone in their body. But it can be plurality in many ways.

Singularity is the norm in the world: it is the general rule that people are solely an individual, and proud of being an individual. Quite often in our current culture and society, anything other than being an individual in one body is met with shaming, stigma, ridicule, dissent, disbelief, denial, dishonor, disgust, and mandatory force to try to get you to be singular. That's called a "singular-normative society". All plurality, whether hearing voices, having other people in your head, having multiple personalities, alters or parts, having amnesiac barriers between entities in your head, functional multiplicity (DID/OSDD systems who choose not to integrate and work on internal community and having a shared life instead), having walk-ins or channeling spirits, talking to guides or other entities, or having your foot in the consensual world while also having a foot in the spirit world or shamanic world are all experiences in plurality by our definition.

Plurality has been around for millennia under many different guises and there are many ways to experience it. And it is not just through abuse or trauma. Sometimes plurality is a gift, sometimes it's a lesson, sometimes it's gained from a quest or trials that you go through, sometimes from training.

Plurality is as normal to humanity as singularity. It's just been buried, pushed aside, weeded out, sometimes hunted and killed, expunged from records and history, anointed and made to be divine and special as in sainthood, demonized and targeted for expulsion as in possession.

Plural Pride Day is a day to recognize the many and myriad ways in which humanity experiences itself as plural.

The Ampersand ("&") has been a symbol of plurality since at least 2003 New, probably longer (need to go back further into archives for more documentation).

Proposed Plural Flags: an Ampersand in any color or colors desired, on a field of White. We like the "patchwork rainbow" effect to show that we are all diverse inside. But a black & on a white background is the "Basic Flag" and you can take it where you need to go from there. Give it dragon wings, fur, teeth, claws, fill it with rainbows, etc. We Crisses don't care. 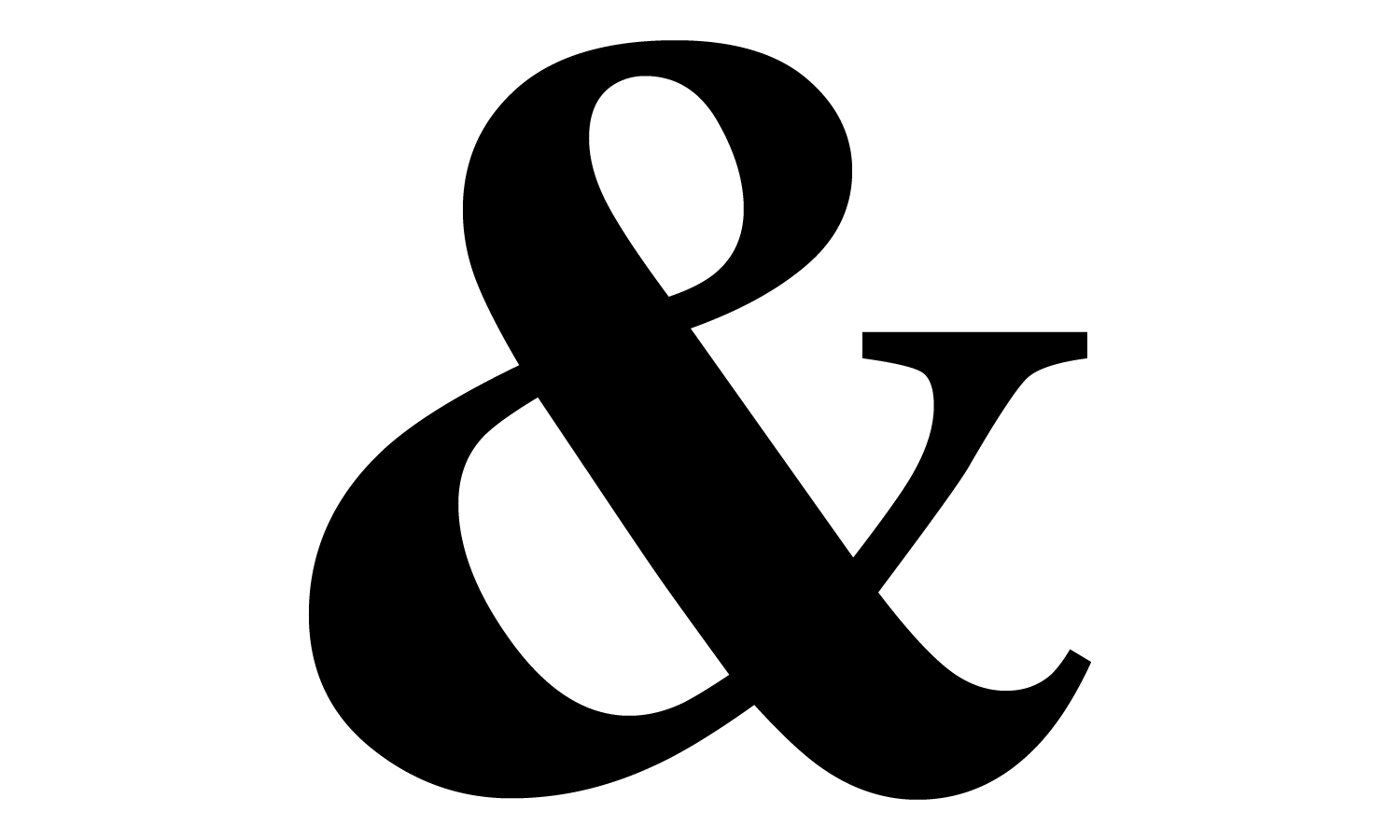 On August 10th, we Crisses designed a "Test run" of a Plural Pride Flag and shared it with selected plurals. This is the design, marked SAMPLE ONLY - as the patchwork is not licensed. Do not distribute, or it's on you for violation of the patchwork license agreement. This is FOR COMMENT ONLY!!! 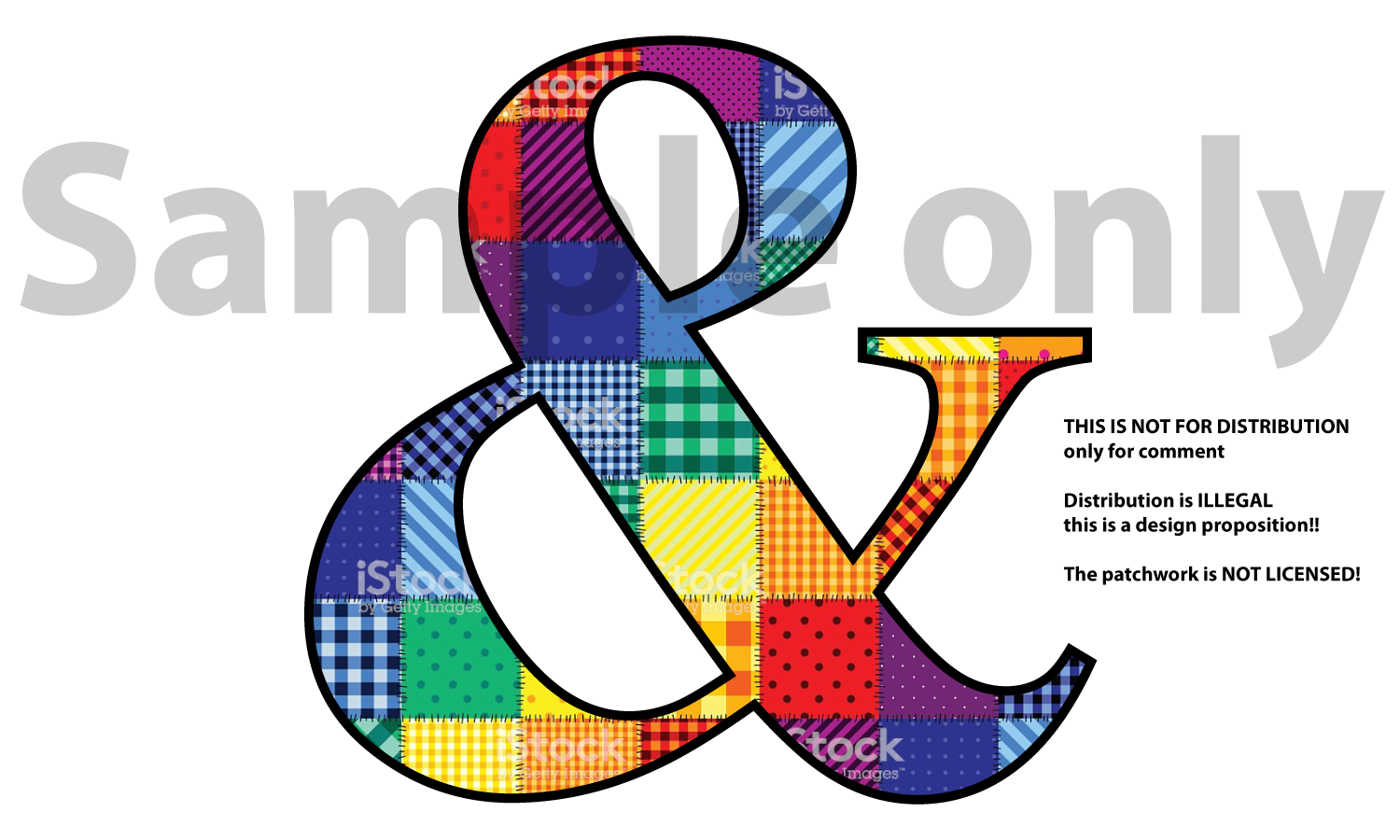 Plurality is the "AND" in the "& company." The "AND" in the "& others." The "et" in "et cetera." The only letter-symbol in the English language to encompass plurality in itself is the & ("ampersand") derived from the Latin letters for "et" which means "and" in Latin — and part of "et cetera" which may be abbreviated &c. in English.

& is a full word in English. Just like "I" is. I is for the individual. & is for the plural. & is thus the perfect compliment for plurality, and the symbol of our movement.

& is common in nearly every English font, it's widely available in craft stores as already made objects that can be repurposed and create your own Plural Pride home decor or meet-up symbols, and easily can be printed on flyers, flags, banners, or drawn in many various and beautiful — but eminently recognizable ways. These Ampersands were purchased, decorated August 12-13th, and the white one used for a Plural Meet-Up in Cleveland Ohio in late August. 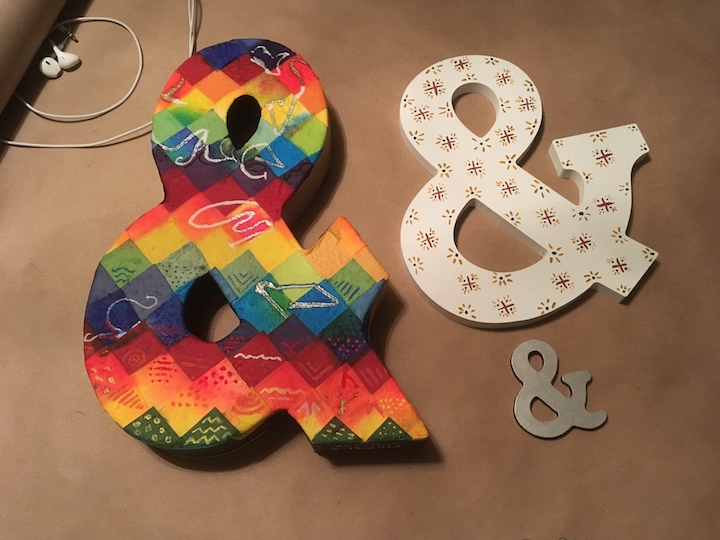 & is the symbol of the movement. Celebrate the "Ampersand" widely and often!! With or without the words "Plural Pride" attached. 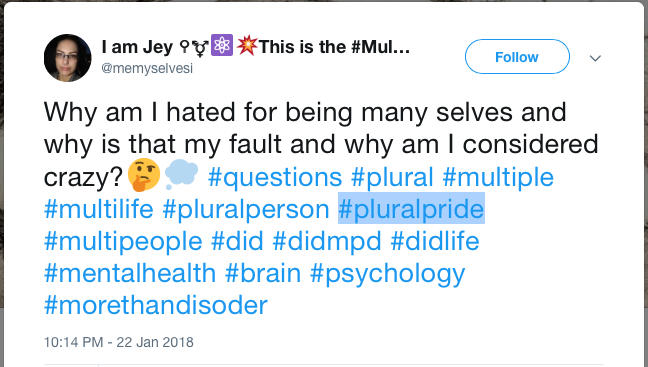 #PluralPride hashtag has been used by various members of the plural community. The oldest tweet Twitter will show with the hashtag at this moment is January 22nd but it has been used more frequently since August 12th 2018 (i.e. after Philly Trans Wellness Conference) and as The Redwoods and other plurals have been doing more public speaking engagements.

Redwoods also made a short presentation on plurality at the Hearing Voices Congress at The Hague, Netherlands, in 2018.

The Crisses made some ad-hoc preliminary "Plural Pride &" "flag" buttons on-site at Philly Trans Wellness Conference and wore it all conference.

Since then, there's been a group of plurals thinking about how to create and document a movement. The Crisses has been doing the bulk of the public writing on the topic as you can see in this section of the Kinhost.org website — pending deciding on where to move it to later. A movement needs to have a manifesto New, history New, etc. This is where it's coming together. 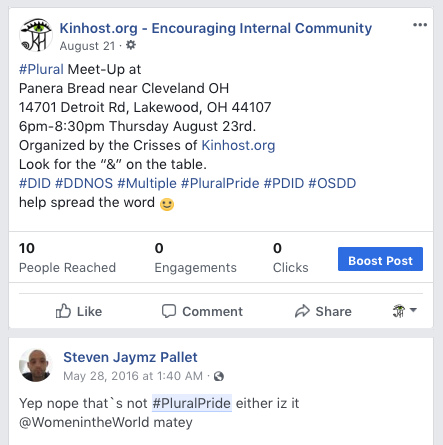 First public #PluralPride hashtag uses on Facebook…someone random (no idea what that's about), and The Crisses posting a Plural Meet-Up in Cleveland, Ohio in August 2018.

Hopefully the tags will continue to trend as we get the word out. We Crisses are relatively new on actually USING Twitter, and Facebook hashtags are a shot in the dark on the best of days.

— probably won't be. Folk wanted to be included in the decision, we put out a survey

see https://revx.us/survey for the link to the survey

Note:
The Crisses has written this page. If you want to sign on in support of Plural Pride Day, please also leave a brief supporting message below. If you don't want to use a real name or email, I don't check the email addresses used on the form so example@example.com will do.

This is the page for the public comment on this proposition — the flag, the colors or lack thereof, the day, the premise, etc. Be polite, or your comments will not be posted.

That was one of the best trips ever!! We still have the pin you& made us at the Philly conference that says “They/Them (Plural)”. So many people think they’re all clever when they say “They/Them, SINGULAR!”. We’re like “Mmmm nope. Still plural 😁” -Joy&

Follow-up from before: We also dislike the diversity patchwork version specifically as a flag. It's an awesome symbol and good use could be made of it; we like the incorporation of the tartan-like colour patterns. But it's a very poor flag, because it has far too many colours and is nearly impossible to draw by hand.

(ref: https://www.youtube.com/watch?v=pnv5iKB2hl4 if you haven't seen it)

Interested. Can we get e-mail updates as this progresses?

Comment by Rose on October 30, 2018, at 06:30 PM
re: flag: one wouldn't of course draw the patchwork by hand. The idea was to show the diversity even in the diversity. So if you look at our hand-made paper collage 3-D & symbol you can see we did some stuff to make each square of color different in some way. So it will never match the patchwork, but each square on the collage-& is different somehow. Because every plural system is different, and every resident within a plural system is different, etc.

But really — decorate you & any way you want, as mentioned in the text about the & symbol being a plural icon — it's not about the colors, it's about the &.

Rose: Thanks for the comment! Maybe we'll have to start an email list at some point. There's already so many places to think of to notify people but we will do our best to keep it in mind!!
Comment by Crisses on December 19, 2018, at 06:23 PM

Being a recently out, this website gives me hope.