Positive, proactive and collaborative self-help for people with multiple personalities.

What selves-help series would be complete without a yearly planner? Not this one for sure!

Check it out New 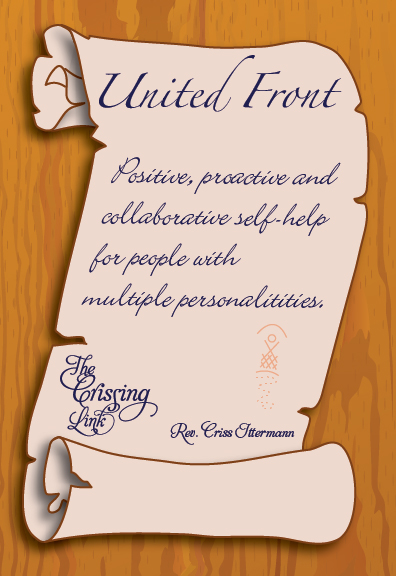 Late 2018 update: split into 3 books, now available as a single bundle through LeanPub

We need to update this page, the artwork, the descriptions. The LeanPub bundle page has the latest information.

The original book United Front is now in 3 volumes. It was going to be a 2-volume set: a book and a separate workbook. Now it's 3 volumes, and the exercises are included in the books. The major difference is that we've decided to split the original scope into the basics of internal community issues for immediate implementation and a book specifically for the more difficult residents. The 3rd book is an expansion of the original scope and is about issues of daily living and basically is a life coaching manual for having a better handle on life issues as a plural living in community.

Based on the United Front Boot Camp this is an extension and expansion of the method of increasing communication and collaboration amongst your inner people.

People with multiple personalities are just people -- with more people inside. Just like any group, the people inside can have problems: there are communication issues, trust issues, cliquishness, secrets, lies, and a who's who of responsibilities -- and irresponsibility. It's like a college dormatory, except the people living there can be any age and there's often no one in charge.

It can be utter chaos.

But most of that chaos is because there are no good role models. There's no plan of action, or organized method for getting everyone on the same page. There's no leadership.

United Front is a plan for how to lead, set standards, reconcile, communicate, make rules, enforce rules, and come to have similar visions and goals as a group.

The first step on every journey in recovery regardless of the disorder is to become more functional. It's not to dig up the skeletons in your closet, or to count the bats in your belfrey. It's to show compassion for your fellows, to respect their rights and honor the rules of the land. This is the epitome of Love Thy Neighbor -- especially the neighbors in your head.

Get the ebook while it's being written and revised through LeanPub! United Front is available through LeanPub at a deeply discounted rate WHILE it is being edited. If you purchase the book through LeanPub you will get updates as they come out, including the final version.

Once the ebook is complete, the softcover and ebook versions will be placed on Amazon, and prices on the ebook will go up.

Summary of One Small Aspect of United Front

The power of language.

Let's say everyone in your system has PTSD (with few exceptions), thus it's "complex PTSD" when you look at the whole group entity — layers on layers of PTSD to handle.

So your body essentially is a group home for a lot of people with PTSD. Without good internal relationships and practices, self & selves compassion, understanding each other's triggers and trauma — you don't function well.

But to say it's because of the people (DID) makes them feel bad. What happens when people with PTSD feel bad? They freak out, right? They have intrusions, nightmares, insomnia, flashbacks, emotional reactions, etc.

You have much more patience with each other. Even "angry guy". Actually — especially so.

And once you realize that "angry guy" is a person and needs a name and to be respected and not labeled by his behavior as if it's going to be there forever — you stop calling him names — he stops feeling pushed away and panics a tiny bit less. Which eases a tiny bit of the PTSD and leaking emotions in your system.

There, you have a 7-paragraph intro to my United Front work.