Why do we seem to "fall apart" when we discover our multiplicity?

Many multiple systems go about their daily lives covering up for each other without even knowing that they're a system. This can go on for decades. So what is it that happens that makes this idyllic period of "ignorance is bliss" end, and why does it sometimes feel like one is "spiraling downwards" the more one learns about one's system?

There may be many reasons that multiples become less able to be "functional" when they discover their multiplicity. Here are some known factors and ideas:

The System is Built to Hide

There's a flashlight issue. DID is meant to hide trauma. There are many ways that traumatized plural systems learn that hiding their distress and pretending that everything is ?normal? is preferable. Many plurals/multiples learn not to talk about it and not to shine a light in dark corners looking for insiders. Doing so scares the crap out of the trauma holders & those in hiding. When they panic, it triggers PTSD reactions and PTSD starts to become contagious in areas of the plural system. Passive influence, switching, emotional outbursts, flashbacks, intrusive thoughts, compulsive behavior, avoidance, etc.

Even without ever having therapy there will be periods of PTSD flare-ups but therapy is a weekly sense of invasion, and the anxiety builds and builds for a while, increasing the symptoms.

It may be helpful to avert this crisis by a therapist immediately handing power to the client rather than poking and probing at the plural system. Making sure that the system can selves-advocate so that they choose the depth, speed, and areas of probing themselves, and the speed of revealing information and secrets in their therapy relationship will help build trust and rapport, and speed their recovery

How you find out may matter

Figuring it out yourselves can be an issue because some systems are built to hide even from themselves. But someone else figuring it out will almost always add an additional level of issues to it. Shame at failing on staying hidden, a sense of failure, or a sense of imminent danger at being discovered. There's many ways this can add extra complication to the issue of self-discovery or being discovered and increase anxiety and rebels in your system acting out. They may panic, and no one is at their best when they panic.

Sometimes it's as simple to explain as having been retraumatized, and that's what revealed the underlying system. Now there are all these previously unknown people in the system to deal with as well as this new trauma.

Corollary: It's possible the new trauma produced a new identity (has been called "splitting" in the past), so the system is dealing with both the new revelation of long-time companions along with dealing with a newly emerged person, and it has created changes in the system's operations that are noticeable.

Onboarding system members ? that's to say helping internals who are stuck in the past or unaware of the rest of the system ? may help with the internal chaos. (For onboarding resources see Onboarding Residents (024) New podcast episode, United Front Boot Camp and the United Front books.)

PTSD can be triggered which means you can end up with all the PTSD symptoms due to pretty normal everyday things.

One example of a common enough trigger is when a traumatized person's own child reaches an age they experienced trauma at ? the fear that their child may have similar trauma, seeing their child being the age they were (and possibly appearing similarly to themself at that age) can be a trigger, or witnessing their child's milestones that they had troubles or struggles with can be a trigger. Even just the fear of being a bad parent or starting to sound like one's own parents can be a trigger ? parents often have an "Oh my! I've become my mother!" moment.

Anything innocuous can also be a trigger. For The Crisses a trigger is the smell of coffee brewing ? and the trigger/anxiety escalates if it's smelled daily.

A front/"host" has just bumped into "Stowaways" in their system, and they don't know who is who or who to trust. Pushing them away, excluding them from life decisions, hating them, repressing them, etc. are generally dangerous ? these are real people with real feelings, and this is their life, too.

There's an underlying misconception here, most of the time, because they're not really new at all. They've really been there all along. But sensing each other's distrust or being pushed aside or held back can be a panic trigger, and cause all types of misbehavior and maladaptive behavior within the system. This triggering of each other within the system can lead to a downward spiral ? a closed feedback loop that descends into panic within the system.

If you suspect this for your system, please run don't walk to our System Trust Issues podcast episodes starting with Episode 009 New. The sooner someone breaks this feedback loop within your system, the sooner you can repair your relationships and work together.

Multiples don't have a built-in owners manual and no role models for internal community. (Well, we do but we haven't figured out that they're everywhere.)

Role models? Any group that gets along in a respectful, compassionate, thoughtful manner will do. Group at a non-profit, the library, a business, etc.

We Crisses like to think of a Star Trek spaceship crew as our "model" for pretty good group interaction. — The Crisses

Then there's the PTSD. PTSD has some stealth built in. It doesn't happen immediately after trauma. It kinda "cooks in" ? when the brain realizes that a trauma hasn't been processed into long-term memory, or when something triggers a reminder of the trauma that was never "put away" in long-term memory in the first place, the brain tries to make it surface so you can "take care of it." Only this memory (or these memories in the case of C-PTSD) has a quality to it or is so incomprehensible that the brain can't figure out how to file it. Since this memory can't be processed, every time it's triggered it becomes a feedback loop rather than getting filed in long-term storage. It just keeps coming back up (intrusive thoughts, flashbacks, insomnia, etc.) until something breaks the cycle.

Anxiety makes nearly every disorder, syndrome, congenital issue, etc. worse. It's no different with CPTSD, PTSD or DID. If you look at the chart below, anxiety lives on the left side of the chart, and can encourage or heighten panic cycles (see the Better Spoons video linked in the same area). You're hypervigilant, emotionally unstable, restless, have insomnia, nightmares, etc. all for good reasons. Your world was rocked and you don't have a plan. One of the best things to do aside from working on building up presence skills New and getting out of panic mode is to have a plan. That plan can be to go through the United Front Boot Camp, listen to a podcast, write up a crisis plan, find a therapist, join a coaching group, join a support group, seek out medication or a mindfulness meditation course to help with anxiety, etc. Basically take that excess energy and focus it somewhere that feels "productive" and like it will help you "handle" your unseen crisis.

The Need to Walk in Their Shoes

We, the Crisses, are currently working with a theory. We'll state the hypothesis first, then the breakdown/explanation of what we're thinking.

In order for stuck residents New (or "stowaways") to front and process the Here & Now New, our body needs to (somewhat) match the vibration/intensity of their stuck trauma and/or the current "state" of the system or front needs to get close enough to their personal "state" in their stuckness to allow them to surface. Then they can become more coconscious and co-aware in order to "wake up" to the Here & Now.

(October 2020 addition) When we are in this heightened awareness state, linked more closely to stuck internal folk, it may be possible to perform a Rescue Mission New to either help them come back to the Here & Now (with their consent), or bring that person tools (maps to find their way to the Here & Now, a newspaper from "now-time" so they can catch up on the Here & Now and perhaps see and fully understand that "Now time is safe" (phrase from SystemSpeak podcast), flashlight, blankets, stuffies or other comfort items) to help them while they're stuck.

Not an easy one to describe... There's a better version of this chart and a video presentation with audio descriptions and closed captions on this topic here. 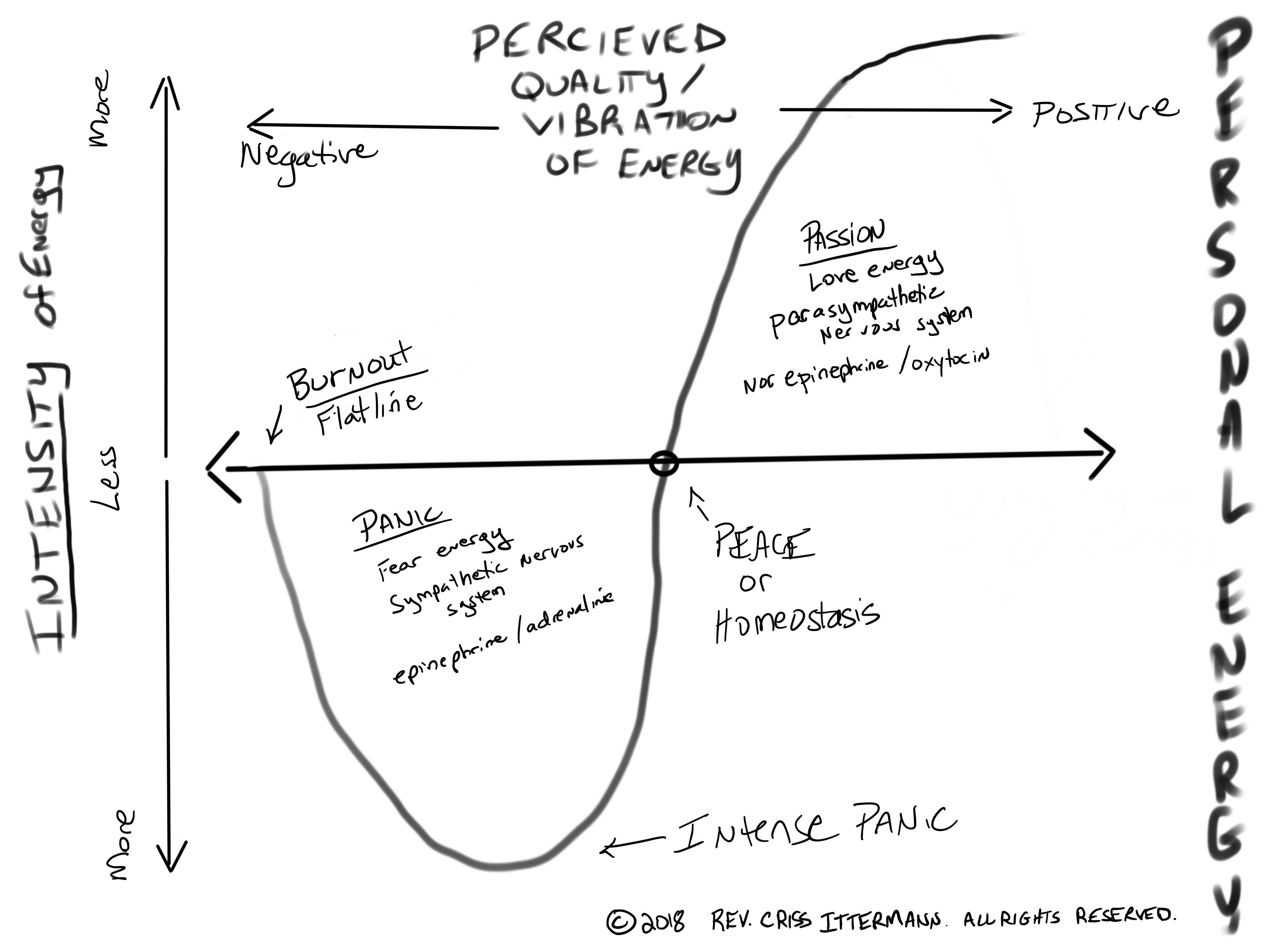 Image Description: A sine-wave type chart labeled ?PERSONAL ENERGY?. The vertical axis (amplitude) is labeled ?Intensity of Energy?. The midpoint is ?Less? the extremes (top and bottom) are labeled ?More?. The horizontal axis is labeled ?Percieved Quality/Vibration of Energy? with the left being labeled ?Negative? through the right being labeled ?Positive?.

The left side of the chart is labeled ?Panic: Fear energy, sympathetic nervous system, epinephrine/adrenaline?: energy starts in the middle center at ?Peace or Homeostasis? and as one experiences more intense panic (the line starts dropping down towards a low of ?Intense Panic?) it moves towards the left (more negative). Eventually the person cannot handle that intensity of negative energy/repercussions anymore and starts to shut down the intensity they can experience energy at, and moves up towards the horizontal middle line again (the wave meets the midline where it is labeled ?Burnout/Flatline? and stops.

The right side of the chart is labeled ?Passion: Love energy, parasympathetic nervous system, norepinephrine/oxytocin?: energy starts in the middle center at ?Peace or Homeostasis? and as one experiences more intense love (the line starts rising towards a high in the upper right corner) it moves towards the right (more positive). ''

When we are "functional" we're living at least in the middle to right of this diagram, probably not far from "Peace" or perhaps even all the way into "Passion" somewhere.

However, our stuck parts are living on the left, or far left, stuck in the Panic end of the diagram.

When we find out we're multiple, our personal perspectives are shaken, and certainly we will falter or maybe even slip to the "panic" side of the diagram ? leaking emotions from others that we may now sense who are deeper on the panic side of things may drag us further left as well.

In order to rescue people from the left side of this diagram, and try to bring them closer to the center (you can't just hop from one side to the other), we suspect that they either have to be able to migrate there — on their own over time or with whatever inspiration — or the people interacting with them have to be able to "get close enough" to their frequency to be perceived, and for some type of communication to occur. Those on the far left, stuck in PTSD feedback loops are unable to perceive reality and the Here & Now.