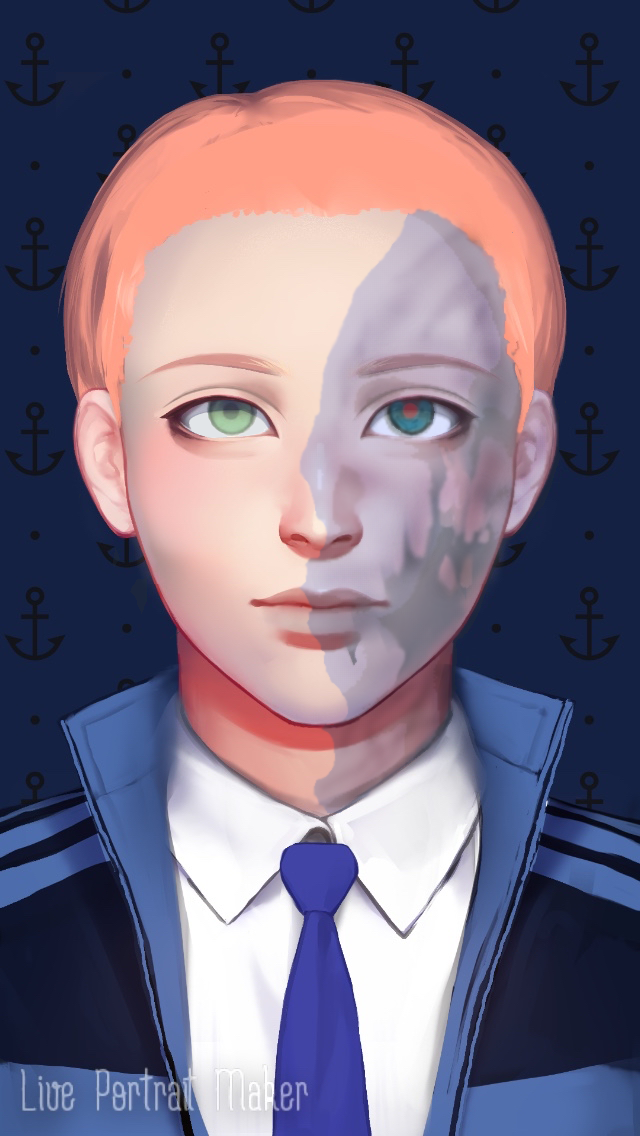 | Picture of Erin drawn in December 1986 by the Crisses. Click on thumbnail for a link to a larger scan of the original drawing.

One of Willow/Ansa'Abram New's possible former incarnations. At the very least, an analog of Ansa'Abram New. Erin's former lives are possibly as Aliessa, and before it, Torry. Right now she enjoys a separate awareness and set of memories from her fellow incarnations. An Irish-American pilot who test flies a new style of (space) shuttle craft but finds out that her co-pilot/trainer is actually an international spy on a hijack mission. The government guns them down when they discover what has happened, causing Erin's accident which leads to an experiment: The government which shot her down remakes her as a cybornetic part-robot, part-human, and trains her for spying missions. This all happens on this Earth-plane or an alternate version which is similar to this one about 40 years in the future. BTW: That version of Earth has a mixture of technology and a rebirth of REAL magic, including magical beasties. And all that I found out years before the Shadowrun universe came out (from the picture I drew of Erin while in therapy, where she is pointing her pistol at a Quetzal-Coatl (winged-snake type of monster) flying outside of her hovercraft, artwork dated 1987). She is efficient, quick-thinking, diligent, agressive, distant, asexual and standoffish.

Hi, I'm Erin, the webadministrator and general database keeper, collector of innane facts, Photoshop & Illustrator editor, etc. I make the forms, pdf files, fonts, everything else this bunch uses on the computer, I maintain the computer, web sites and programs, do most of the typing, etc. I'm busy. LOL. It also means I'm technically not quite as retired as I was promised to be, and now some lamebrain in this skull has the bright idea that maybe I'll come out of my semi-retirement and start earning us some cash again, get with it people: R-E-T-I-R-E-M-E-N-T. Got it? Find another occupation. Or another sucker.

Ok: technically I'm not a cyborg anymore. I was in real life, back when I had my own body, before I died. Which is to say in the future for all you folks :)

I got into a horrible accident and had my left arm, portions of both legs and genetalia, left shoulder, portion of my neck, and half my face replaced with synthetic skin and other enhancements. They did a variable job on it...my genetalia never worked again. My arms and legs worked, my skin felt weird compared to what was left of my natural skin...somewhat numbed, and didn't look real, technically. They put some computer stuff and hooked it into my brain...I don't remember all the technical terms for all of it.

How I came here? Well, I'm still figuring it out, but it seems I'm one of the people who was attatched to Star for whatever reason (that's the part we're trying to figure out: why were we--Aliessa, Torry and myself-- attatched to Star), and when Star moved into this body, I was with her. Mainly I became aware rather than staying dormant because this world reminded me of my own world (probably because it is, or is so close to as to make not much difference).

When I was born, I lived outside of Chicago Illinois (I think I remembered one of the names of a military academy I belonged to but haven't looked it up to see if it exists yet....Sutton-Brentner Academy, I think, gonna look that up now--well, there's a Sutton Academy somewhere in the US, but nothing under Brentner right now) for most of my childhood and teen years, and then I applied to military service. My mom might not have been military, I don't remember, but my dad was in the military. I ended up working airplanes and lowflying missions for a while, but they had brought shuttlecraft technology to a new height and were experimenting with Skimmers, that's what I think we called them--it might have been a nickname. The crafts went out of atmosphere, then reentered to make it easier to travel around the globe to, say, Japan. I was trained and on my first flight in a Skimmer, the bastard who was taking me up turned out to be a doubleagent for someone else and wanted to hijack the craft...when the military found out, they shot us down rather than have the guy hijack the ship. So I went down with the plane, I think I landed somewhere around Texas...dunno because I wasn't particularly conscious.

It took them a bit to find me (or maybe it took them a while to find bits of me... ick), I think some shamanic woman out there helped keep me alive with magick until the military people got there. That's when they reconstructed me. It was pretty amazing that I'd lived that long. Maybe if my dad weren't a high-mucky-muck in the military they wouldn't have done it, maybe they'd have just buried me alive and sang my praises as a brave pilot. Who knows.

So I was reconstructed as I still feel to this day....when I'm Front, my skin feels weird where the synthskin was, and I don't have a sex drive, and various other weirdnesses.

I don't remember how I died, I was commissioned by the military again after I was healed, and they didn't want me as a pilot anymore. :/ they had me trained in spying and such. I eventually got fed up with them and sold out to someone else.

The government structure was different than today. My main home was still Chicago, but they weren't the USA anymore...I don't remember what changed in the government, but when I landed in Texas, it wasn't the same country. The government was pretty weak compared to the corporations--althought that's becoming more and more true right now... and there were other changes.

I don't remember much about that period, or how I died, yet. I was pretty lucky to recently remember stuff about my parents.